He read it all over again with tears glistening through his eyes. The last letter!!

His mind was filled with the memories of the past. Father’s sudden demise and a lonely childhood had left deep scars on his heart. He remembered the day when he was standing at the corridors of the boarding school accompanied by his dad. He was pleading with him.

“You will be lonely without me. There’s no one to look after you. Please let me stay at home”, he pleaded.

Father looked at him with deep affection and gently caressed his hair. He kissed on his forehead and said,” I will write to you every month.”

Looking into father’s eyes, he realized that it was hard for him too.

At the beginning of each month, he rushed down the corridors to the entry gates of the school. There he waited eagerly for the postman to arrive.

But this time it didn’t arrive.

He was anxious and worried at the same time. An unknown fear crept up in his heart. He rushed to the headmaster but in vain. He felt utterly helpless. Anger seethed through his body at headmaster’s callousness. He wasn’t able to concentrate on anything. He couldn’t attend the classes. He wept the entire night. On second day also there was no sign of the letter.

The third day the headmaster called him. He said, “Whom god loves, dies young”. And he knew what had happened!

Saying so, the headmaster handed him down the letter found in his father’s closet.

When he regained his senses, he had developed a strict aversion to the headmaster 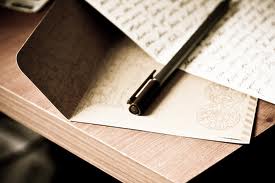