It takes a completely wild imagination and a disciplined eye to be creative. And no one proves it better than Atul Kumar, the artists of ‘Piya Behrupiya’, and every single person behind the curtains of this play. The audience at the Stein Auditorium, India Habitat Centre, was driven into fits of laughter as the vibrant artists of the play enacted Shakespeare’s “Twelfth Night”, a romantic comedy in a ‘Desi’ (Indianised) manner using traditional folk songs and music.

(How do I express my grief, Oh Lord Rama! My brother has gone to the other world!)

In her grief, she fails to see Orsino’s love for her. To win her heart, Orsino engages the cross-dressed Viola to plead with Olivia on his behalf. Viola reaches Olivia’s home dressed as a Caesario and then follows a bitter sweet chain of events. The epic moment comes when Caesario introduces himself as “I belong to a very good family, bas thoda personal level pe disturb chal raha hoon (I am just a little disturbed at the personal level)”.

One cannot help marvelling at the sheer beauty of poetry expressing Olivia’s pangs of love in the song,

(O girl, why did you fell in love, Now you won’t be the same)

Also, we have the Bengali Sir Toby (Olivia’s uncle) carousing with his friend Andrew Dada (Olivia’s Admirer) and dancing with Shakespeare’s clown Phool Singh (a fool in the Olivia’s household) on the song, “ Gori Tere Naina Re (O girl, your eyes)”.

The play was also performed this year at the Albert Museum Hall, Jaipur as a part of Jaipur Literature Festival’s (JLF) tradition of celebrating the arts. Covering the event as one of the bloggers for JLF, I remember Amidyana, from Boulder, Colorado, sitting amidst the audience in the Albert Museum, said “I don’t know the language but the play was fascinating. The artists are so lively and cheerful. I hope they come to Boulder one day and I will be happy to be of any help to them. The play was completely original and true to Shakespeare.”

This time again at the India Habitat Centre, the artists weaved the same magic and received a standing ovation from the audience for the outstanding performance. And I believe, the one person who deserves a special mention is Amitosh Nagpal, who cleverly translated the play and is retelling Shakespeare to the people in a less complicated and folk form. 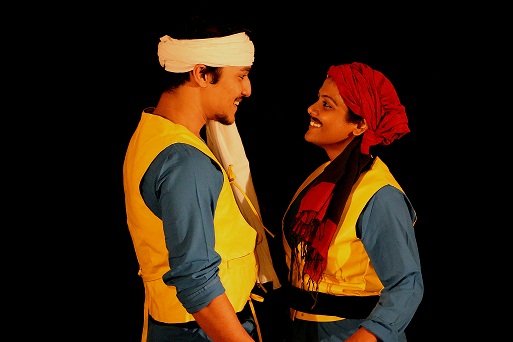 * This article is not for commercial purpose and just expresses the personal views of the author.