This book review was first published at “www.boloji.com“.

Our very own resident Wordsworth in prose, Ruskin Bond, recounts the first twenty one years of his life in his memoir ‘Scenes from a Writer’s Life’. They formed the most emotional, impressionable, and vulnerable year of his life. The first twenty one years were his formative years as a writer. And as Bond puts, “There are struggles, setbacks, failures, but hope and optimism have not been blighted, and the cynicism of middle age is yet far distant”. Ruskin Bond is an unconventional writer who writes only from his own experiences. His writing goes inward rather than outwards, as he prefers to delve deeper into himself. Reading his works is like taking in a fresh mountain air-soothing and relaxing.

The book is divided into two sections. The first section gives a glimpse of Bond’s early childhood and boyhood years, his life with his father, the lonely period with his mother and stepfather, and many such events which sowed the seeds of a writer in him. The other section covers extracts from Bond’s journal of 1951, which gives reader an idea of how he thought and felt and wrote when he was seventeen.

As a child, Bond witnessed his parent’s quarrels at a very small age. The impact of quarrels on his mind was so deep that even as an adult, he felt insecure whenever he witnessed quarrels between the people close to him. Bond was very close to his father. His love for his father is evident when he says, “He did his best for me, dear man. He gave me his time, his companionship, his complete attention”. His father died when Bond was just ten. The last letter that Bond received from his father is also given in the book. After his father’s death, Bond was lonely and his friends were Miss Kellner, a tenant at his Granny’s place, gardener named Dhukhi, and his books. None could fill the loneliness in his life after his father’s demise. In his letter addressed to his father he writes, “Is that heaven – the perfect place with the perfect companion? And if you and I meet again, Dad, will you look the same, and will I be a small boy or an old man? And what happened to all those missing years?”

Dehradun and Shimla in 1945

Mr. Bond takes you back to the Dehra of 1945, presently called Dheradun. Also, one gets a glimpse of the then summer capital of India under British rule, Shimla. For Dehra, Bond says,” Dehra was a green and leafy place. The houses were separated by hedges, not walls, and the residential areas were criss-crossed by little lanes bordered by hibiscus or oleander shrubs”. In the playing fields of Shimla, Bond found his first reader and critic, with whom he became a very close friend. With a subtle humour, Bond narrates the account of his first book that he wrote at the age of twelve and the punishment meted out to him for writing it. Also, Bond makes you feel the pain of the India’s partition in1947, which separated Bond from one of his close friends.

For Bond, reading is his religion. It helped him discover his soul. As a child he read anything and everything that came his way. And even, today he can read any book provided it has tone, style and substance. In Bond’s view,

“Book readers are special people, and they will always turn to books as the ultimate pleasure. Those who do not read are the unfortunate ones. There’s nothing wrong with them; but they are missing out on one of life’s compensations and rewards. A great book is a friend that never lets you down. You can return to it again and again, and the joy fist derived from it will still be there”

Bond as a person

Through this book, you het know bond’s views on life, friendship, love, and get to know him as a person. Perhaps, the struggles he faced made him more humble and sensitive towards life as is evident in his lines,

“To love and be loved is the greatest happiness…Men and women leave the age of childhood behind, and are so busy with their buyings and sellings, their ambitions and their hopes, their loves and hates, that they forget they once lived in a land where dreams were real. I will not forget my childhood, I shall not surrender it.”

With wit, warmth and candour, Bond brings to light small-town India and its inhabitants, caught between their daily lives and dreams. His struggle which eventually bore fruit with the publishing of his first master piece, ‘The Room on the Roof’ making him eventually one of India’s most treasured authors is recounted by Bond in a simple and compelling manner.

Scenes from a Writer’s Life 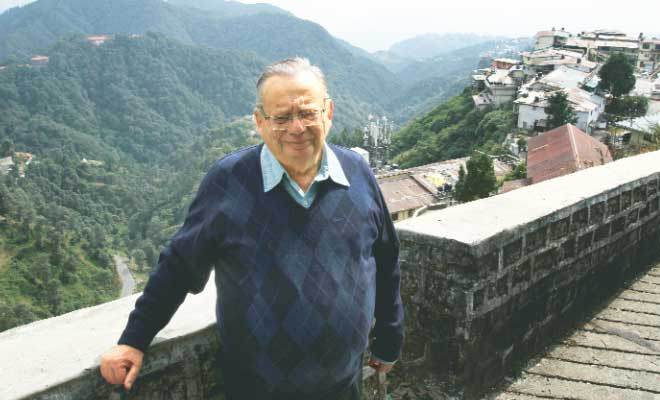