* This book review has been published at http://www.womensweb.in/

“But you are innocent,” said Lakshman, tears streaming down his face.

‘And if I was not? Would it then be socially appropriate and legally justified for a husband to throw his woman out of his house? A jungle is preferable to such an intolerant society.’

The daughter of Earth, and worshipped as a Goddess, Sita, however faced the unjust act of abandonment by her husband who is often referred to as ekam-patni-vrata (devoted to a single wife.)

Devdutt Pattanaik’s, Sita, An Illustrated Retelling Of The Ramayana, speculates on Sita by tracing the various phases of her life: her childhood as Janaka’s daughter; her stay in the forest with her husband; her abduction by Ravana; her interactions with the women of Lanka, the recipes they shared, the emotions they shared; her connection with the Mother Earth and Nature and her transformation from the demure goddess Gauri to untamed Kali, who chose Rama to be her dependable God.
Additionally, the book also provokes thoughts on the notions of fidelity and self-image.

Sita – A warrior, not a victim

People have often looked upon Sita as a victim. While narrating the tales of the Ramayana, we often sympathise with or pity her. That is why people rarely name their daughters after Sita, as they believe that she suffered a lot.
However, the book tries to change this notion. Sita is not weak and definitely not a victim. She is a woman who dares to take her own decisions. It was Sita’s firm decision to join her husband in exile when she says, “Fear not, I will be no burden; I can take care of myself. As long as I am beside you and behind you, you will want for nothing.” She chose to spend fourteen years in the forest to ensure that her husband never felt incomplete.

When abducted by Ravana, she does not feel helpless. She stays alert and realizing that she couldn’t escape, she thinks of a way to let her husband know of her whereabouts. She could have easily allowed Hanuman to rescue her and take her to Rama. But she chose not to because her husband’s ‘honour’ was at stake. Through her faith came her patience.

Unfortunately, Ayodhya demanded her innocence. But how does one proves purity or chastity? Those who trust need no proof and those who do not trust reject all proof. Hence, when the time came she stood for her dignity. She is not weak. She is strength. She is dignity. She is patience. She is grace. She is purity. She is Sita, who never wavers in her thoughts and deeds. Her confidence and dedication emanates from her self-respect. By refusing to return to Rama, Sita demonstrates that she doesn’t need social structures to give her social status. Instead, she chooses the Earth where there are no boundaries and rules.

“He had liberated her long ago from the burden of being Ram’s wife. But he would always be Sita’s husband.”

Despite being abandoned for no fault of hers, Sita remains true to Rama and understands his decision without complaints. However, Rama’s refusal to remarry and being devoted to a single wife adds to the complexity of the story. It makes one think that it might be an expression of love for some men and women.

Devdutt Pattnaik weaves together various narratives of the Ramayana from different regions across India and outside India. Narratives from across the country, folklore, plays, paintings and poetry by different authors in different times and places have been beautifully strung together.

One realizes that the Ramayana is not a single text, or even multiple texts. It is a belief, a thought materialized, ritualized, and celebrated through narration, songs, plays, painting and puppetry. In every region, and every culture, there is a different story. Each retelling has some diversity. There are various ways of looking at the Ramayana. As Devdutt Pattanaik puts it,

Who sees it all?

Varuna has but a thousand eyes

You and I, only two.
Sita, An Illustrated Retelling Of The Ramayana takes you back to an era where the lives of God and humans still intersected with each other. Pattnaik does complete justice to building the character of Sita. However, when compared to the genre of books such as The Palace of Illusions, where the narration is from a woman’s perspective, it slightly misses the mark.

Overall, Pattanaik’s unconventional approach and engaging style throughout the narrative is laudatory. 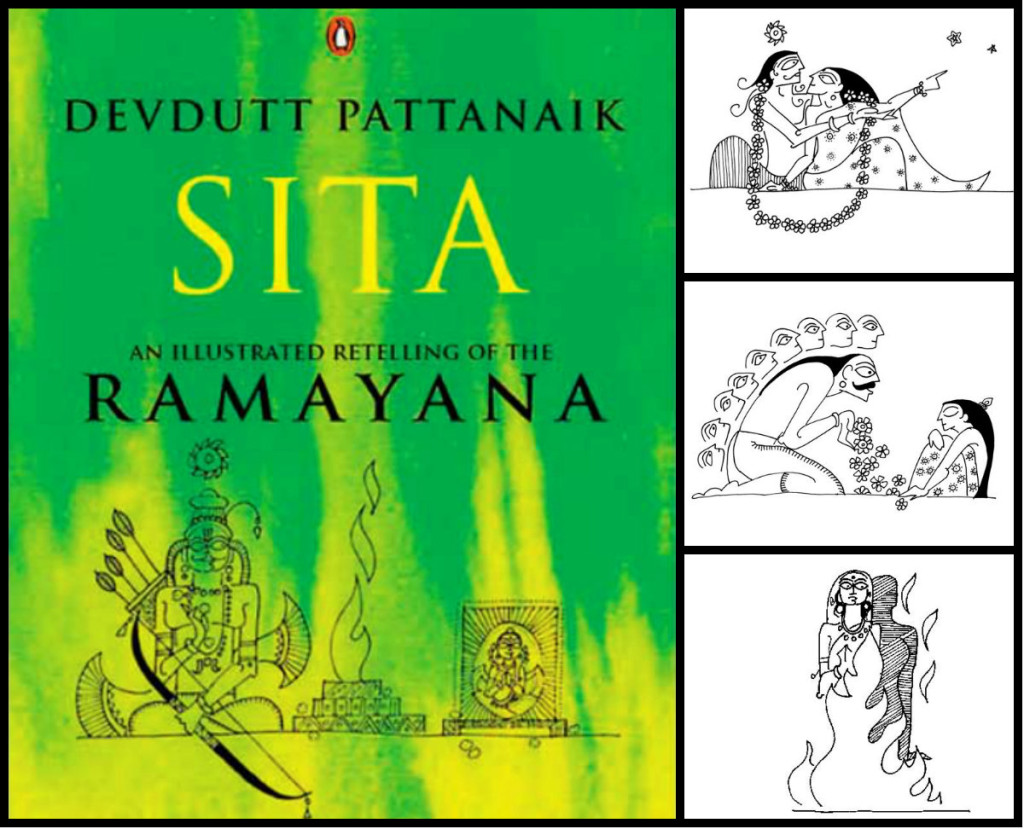 3 thoughts on “Sita – An Illustrated Retelling of Ramayana”