* This book review was written for “Views on News” magazine. Published at: http://viewsonnewsonline.com/.

This fourth book by the chief editor of The Indian Express uses magic realism to show the highs and lows of city life.
Through his lyrical and lucid prose, author Raj Kamal Jha weaves a tale of modern India, where violence, poverty and tenderness exist side-by-side. He shows the horrific side of New Delhi, the capital city of the country, where each day, millions of dreams are born and millions of hopes are killed. There are three disparate stories running in this novel, all skillfully entwined together to show India in a different light and revealing a different form of love.

Delhi is introduced through the lives of three main characters. As night falls, an elderly woman narrates stories from her past to her sleeping daughter, who, though, grown-up has returned home after a long time in a complete messed-up state, hiding many secrets. In another corner of the city, as the last Metro pulls out of Rajiv Chowk station, a young man boards the train and visualizes a murder. The only thing we know about him is that “he is going to kill and he is going to die”. The third character is an abandoned child, named Orphan, who lies on the steps of an orphanage, wrapped in a red towel as his mother walks away. Each story is propelled forward by fear and the mystery about how they are all related.

However, despite these humans, it is the Metro with its coaches, coursing through the city that is the main character of the book. Apart from being a means of transportation, it also acts as a home for lovers, where they lean into each other, eyes closed, fingers locked, completely oblivious to the world around. Every passenger is a different story. During summer, the Metro station acts as a shelter for thousands of people who sleep at its entrance. If they are lucky enough, they can catch the AC draught escaping from the coaches when the train stops or the doors open. A character in the novel even visualizes the Metro as a glowing barium pill which is swallowed and courses through the dark insides of the city. It is in the Metro that the young man dreams of a murder.

Jha is right when he writes that “nobody in this city notices one”. Passengers ride escalators like toys and people rub against each other in the jam-packed metro, each waiting to reach his destination with eyes filled with despair. The city is also a place where people protest and the police use water cannons to disperse them, where the poor beg and beseech and where the gruesome gang rape shows the dark realities.

A LIFE OF CONTRASTS

Various lives are contrasted in this book. There are luxurious apartment complexes, community parks, big malls, and seven-star hotels. And a few miles from these are garbage heaps and giant sewer pipes which serve as homes for mothers and babies. Outside the mirage of lush green apartment complexes lies the bitter reality — disease, death, grief and rage.

But people have become accustomed to this way of life — the poor to begging and beseeching and the rich, to be indifferent to them. This is showcased through a character, a woman begging at traffic lights with a baby. Each morning, before rush hour, she dresses the baby in scraps of cloth gathered from trash heaps, and appears at the traffic signal looking injured and bleeding. She chooses a car with at least one woman in it, knocks at its window and goes down on her knees raising the baby skywards. Sometimes, she breaks into a startling scream with tears rolling down her cheeks. Myriad questions are raised — who is the baby’s father, where did the woman come from, is she the mother of the baby? No one knows, no one asks. Regular passers-by do not look at her and if someone gives her alms, it is because they do not want their car to get dirty. Later, the same woman says: “In this city, do not cry when no one’s looking.”

Through magical realism, Jha illuminates poverty, violence, and loss, giving the book an almost fairy-tale quality. These include women with 12 feet, a dog who speaks and acts as a guide… In that sense, Jha’s book uses a technique similar to Salman Rushdie’s Midnight’s Children.

Read it to know more about the highs and lows of life of modern India.

She Will Build Him a City
By Raj Kamal Jha
Bloomsbury India
Rs 599, 339 pages

Passengers ride escalators like toys and people rub against each other in the jam-packed metro, with eyes filled with despair. The city is also a place where people protest and where the poor beg and beseech. 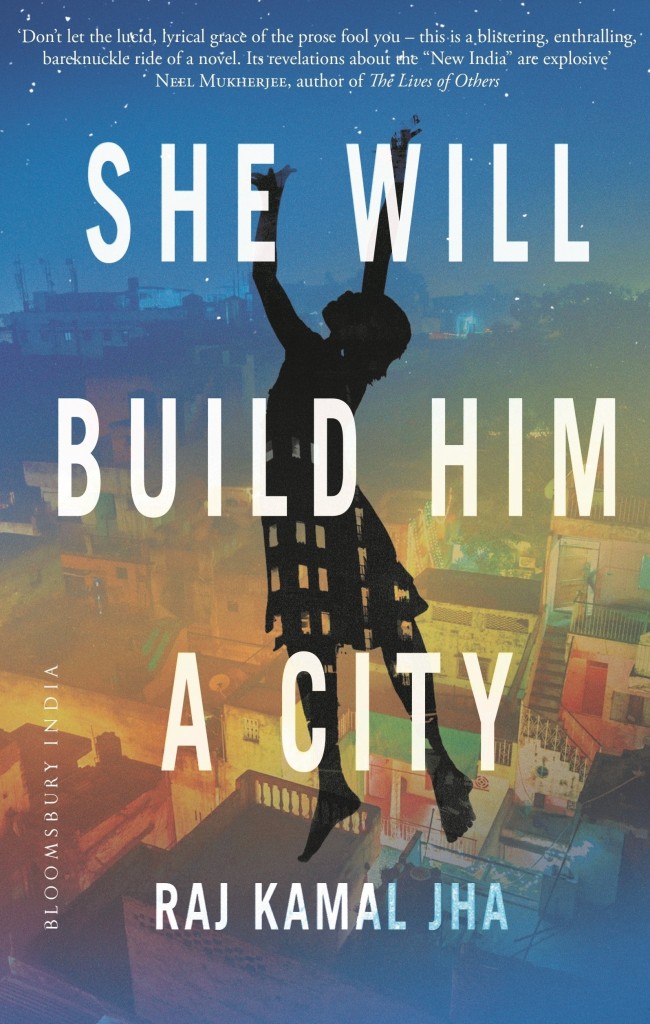